Krupa Gallery is a place and an idea that came into being as a result of a passion shared by Sylwia and Piotr Krupa. It is a passion to engage in important topics, with international reach. Krupa Gallery as a venue is currently materialising in a historic tenement at the Market Square in Wrocław. Contemporary art by artists from Poland and Central Europe will be presented there. It will also be a venue for important debates and conversations about the condition of our world. The first step towards this was the production of Ewa Ewart’s documentary “The Curse of Abundance”, which forces the viewer to think deeply.

“Apolonia’s Twelve Husbands” is the latest series of paintings by Pola Dwurnik, as well as her first individual exhibition in Warsaw since 2012.
The artist refers to her earlier series entitled “Apolonia’s Garden”, in which she portrayed her ex-boyfriends personified as animals. This time, referring to the history of painting, she has created twelve male portraits as allegories of the twelve months. Each of the artist’s “imaginary husbands” is not merely a representation of a different season, but also of a distinct stage in a woman’s life as well as a concept of an ideal partner. Dwurnik combines her own experiences with the expectations and fantasies of other women, resulting in twelve metaphors of contemporary society. And while she approaches the subject matter with the sense of humour typical of her entire oeuvre, it doesn’t deprive the series of its significant – or occasionally even dire– nature.
Curator: Paulina Olszewska

More about the exhibition 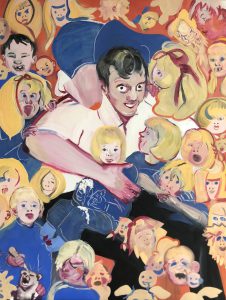 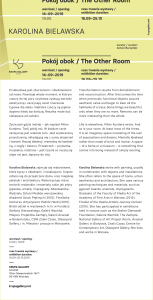 Karolina Bielawska fills The Other Room with her most recent painting installations. The exhibition is shown in the temporary seat of the Krupa Gallery. One of its elements, however, has been moved to a construction site – the rooms near the Market Square in Wrocław, which are undergoing a major overhaul to become the permanent seat of the gallery.
—
The works are composed of four layers of technical materials – OSB chipboard, quartz sand primer for levelling difficult surfaces, putty gypsum with glass fibre to smooth and reinforce the surface, and finally wall paint – acrylic enamel.
—
The compositions on the canvases look as though they followed a logical formula, a geometrical order similar to Le Corbusier’s Modulor. They are inscribed in a structure, they seem to follow it and simultaneously – to break free. The shapes divert from lines of symmetry, escape the subconsciously anticipated proportionate arrangements that could be described with a formula, equation or the golden ratio to introduce peacefulness through coherence. Actually, they are imperfect, just like real life. Abandoning the previously ideal forms is a powerful declaration – of weakness and freedom at the same time. The old order is no longer binding, a new stage of enforcing personal rules is approaching.

A film festival is about watching films; Kasia Kmita watches the festival – and shows it as the exhibition A Horizontal Panorama: Kodras. The presentation consists of just one monumental work. It contains episodes from the past of the New Horizons cinema, festival venues, situations and emotions. Kmita creates a visual representation of the festival by combining various artistic traditions. While referring to the convention of a heroic painting-panorama, she adopts a traditional Polish technique of paper-cutting, which is rooted in folk art, and weaves her narrative by using tools borrowed from the world of comics and film. A Horizontal Panorama: Kodras is an elaborate depiction of the time-space of the New Horizons, in which film stories are intertwined with people’s experiences to present the phenomenon of urban folklore.
Curator: Stach Szabłowski 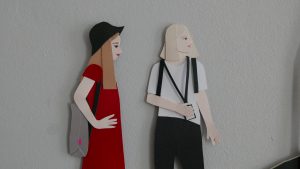